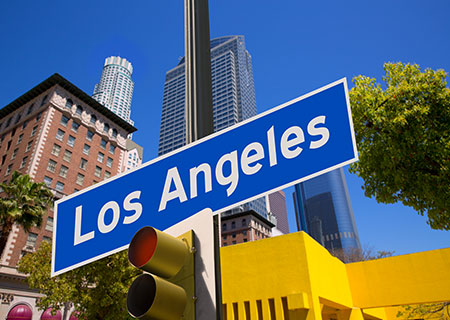 The Area Before it was Los Angeles

Well before any Europeans had arrived in the area, Southern California was home to many villages of hunters and gatherers. The villages were mostly located around the area rivers where it was easier for the early residents to find food and water. The Los Angeles area was home to the Cahuilla and Serrano people (Northern Uto-Aztec) among other Native American groups. This was normal life for thousands of years until the 1760s when the first Spanish and Mexican settlers arrived in the area.

Some of the early explorers and settlers were Gaspar de Portola and Junipero Serra. They traveled with a group of soldiers, missionaries and artisans.

In September of 1781, a permanent Spanish colony was set up and named El Pueblo de Nuestra Señora de los Angeles di Porciúncula. It was a presidio and town under the rule of King Carlos III of Spain. 11 families from Mexico volunteered to call the colony, named after the shrine to the Virgin Mary in Italy (Our Lady of the Angels), their home.

The colony was established on the Río Porciúncula, inland where it would be safe, instead of by the Pacific Ocean where it could have been easily raided. The volunteer families received farm land and given tools and were also allowed tax exemptions. The early settlers wanted to produce a new Spain, mimicking their known way of life. They had a mission and sought to convert the natives. They intermarried with the local women, trying to pacify the natives and integrate them into the Spanish way of life.

Unfortunately, that beautiful, picturesque valley did not last long. By the late 1850s the river was dry and the beautiful plains were dry and barren. The river was diverted for irrigation, the forests cut down, the marshes and wetlands dry, and the land and water polluted. By 1900 the river had mostly dried up, only running for part of the year. The river was eventually lined with cement, but that did not help the river at all. Of course that cement path still exists and it is still called the Los Angeles River, but now almost all of the water that flows through it is treated sewage and street runoff. A sad end to a once great river.

Los Angeles is not a typically planned big city. There are several different and distinct population areas, different economic areas, etc. All connected with a crazy maze of streets and freeways. The reason for the current setup is simple when you consider the history. The locations of the early Indian villages became the early population centers. The trails between them became early roads, then streets, then freeways. The vacant lands between the populated areas filled in along the way with ranchos, then boom towns, then more modern buildings.

The Time of Ranchos

During the Spanish ruled time, Los Angeles was covered by huge ranchos. The government gave enormous land grants as favors to wealthy friends of the government. One of the larger ranchos was Rancho San Pedro which started as a gift of seventy five thousand acres in 1784. It has since been turned into a museum that tells the story of what it was like to live in early Los Angeles in the time of the ranchos.